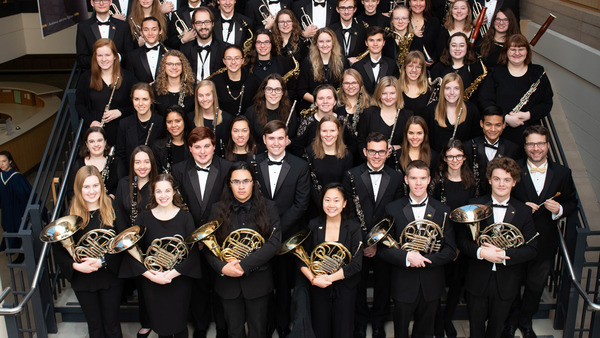 Founded in 1878, the Gustavus Wind Orchestra, affectionately known as GWO, is the premiere and official touring wind ensemble at Gustavus Adolphus College. The Gustavus Wind Orchestra is the oldest touring ensemble at Gustavus and holds the distinguished honor of being the oldest touring collegiate band in the United States west of the Mississippi River. GWO performs annually at events such as the Nobel Conference, Family Weekend, Winds of Christmas, and Commencement as well as other performances throughout the year both on and off campus, including CBDNA & the MMEA Midwinter Clinic. Made up of majors and minors from across campus, the Gustavus Wind Orchestra prides itself on performing the highest caliber of wind ensemble literature possible, regularly performing the works of David Maslanka, Karel Husa, Julie Guirox, and many others.